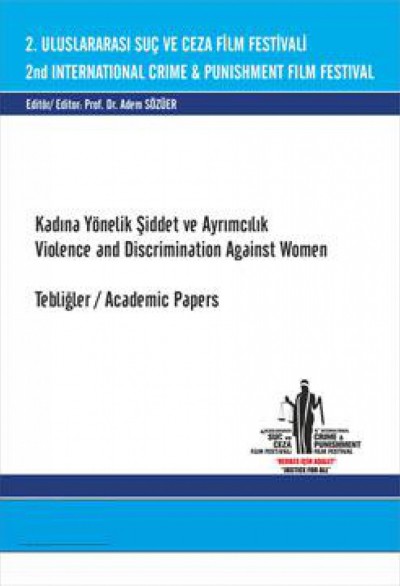 
Dear Passengers of Law and Cinema,
We are so happy to have successfully accomplished the II. International Crime and Punishment Film Festival, which brings together the world of academia and cinema, with the ideal of achieving justice for all and building a more just world. During the 2013 edition of the Film Festival, academics, NGO representatives, public officials and participants from the world of cinema discussed -Juvenile Justice-. While addressing the legal and socio-economic aspects of the main theme, we also tried to understand the issues involved and find solutions from the perspective of cinema, as a medium in which true society is reflected. The First International Crime and Punishment Film Festival in 2011 had as its main theme -The Period of Coups and Confronting the Past- and as such addressed an important concept. Throughout the Festival, we watched films presenting the great sufferings caused by Coups and also discussed, with the creators of those films and academics, what should be done to prevent them from happening again.
Gathering great attention in Turkish and International Media in its first year, in its second year, in 2012, our Festival addressed one of the major problems of mankind. We chose that problem, namely -Violence and Discrimination against Women, - as our main theme of the Festival. We do believe that in a society where women’s rights have not become a reality, the improvement of human rights and democracy, in general, will not be possible. The magnitude of the problem in our society is well-known. However, before we find effective ways to tackle this societal problem, a number of issues need to be addressed first.
There have been great developments regarding criminal law in Turkey. The decision in 1999 on Turkey’s candidate status for European Union membership has paved the way for Turkey to adopt numerous important Constitutional and legal reforms intended to ensure democracy, the rule of law and the protection of human rights. Many of these reforms have related directly to the functioning of the Turkish judicial system. Turkey has shown great commitment in progressing the pace of legal reforms that have brought considerable changes to the political and legal system. It has also taken important steps to ensure their effective implementation, in permitting Turkish citizens to enjoy the basic freedoms and human rights in line with universal standards. The fight against violence and discrimination, human trafficking, drug trafficking and human rights are the very issues that play a crucial role in solving the criminal problems Turkey faces today.
An important Act has been promulgated in order to protect women, children, family members and victims of stalking who are exposed to violence or the threat of violence. This Act, on the protection of the family and the prevention of violence against women, gained force on the 20th of March 2012. This Act defines domestic violence as physical, sexual, psychological and economic violence which occurs in the family and in the home, or between people who are considered as a part of family, even if the victim and the perpetrators of violence do not share the same home. This definition can be regarded as a new approach, in that violence is not only understood as physical but also psychological violence. Previously, violence was only understood as a physical concept in Turkey. A second important new approach in the Act regards the expansion of protection to women, not only from persons with whom they are in a legal relationship, but also other persons. The Act further provides for many protective and preventive measures for combatting violence against women. As a protective measure, the Act regulates that women should be provided with a home. As a preventive measure, women are also protected against acts such as defamation, inhuman treatment and stalking. Further, the Act has a special provision regarding -reporting, - in article 7 thereof. Pursuant to this provision, every individual is entitled to report a case to the authorities in every instance of the violence or the threat of violence. Also, in terms of crime, the Turkish criminal code stipulates reporting comprehensive and renders reporting mandatory. In the past, the issue of domestic violence against women was seen as a family matter, to be kept secret and in which the state should not intervene.
In brief, through the reform of the criminal law and the adoption of a new Act which focuses women and family issues, Turkey has achieved significant important developments regarding violence and discrimination against women. What has huge importance now is that the measures be implemented in a manner that women are indeed effectively protected. The issue of violence and discrimination against women cannot be dealt with only through judicial aspects, but must also be addressed from the political, sociological, economical and artistic planes.
As during previous years, this year our discussions also addressed the socio-economic and economic aspects of the main theme. We tried to understand the problems of child delinquency and juvenile justice and find solutions from the perspective of law and cinema. Within the academic program which lasted for five days, academics, NGO representatives, activists, writers, cinema artists and press members had the opportunity to express their ideas.
We are in the opinion that, to detect the problems and find solutions can be possible by comparing this with the other countries. For this reason, I would like to thank those who came from other countries and from Turkey to share valuable ideas and those who contributed to the organization of the 2nd Crime and Punishment Film Festival. Also I would like to express my gratefulness those ensuing publication of long version of papers which have been presented within the framework of the 2nd Crime and Punishment Film Festival in 2012.
Best regards, Prof. Dr. Adem SözüerDirector of Crime and Punishment Film Festival