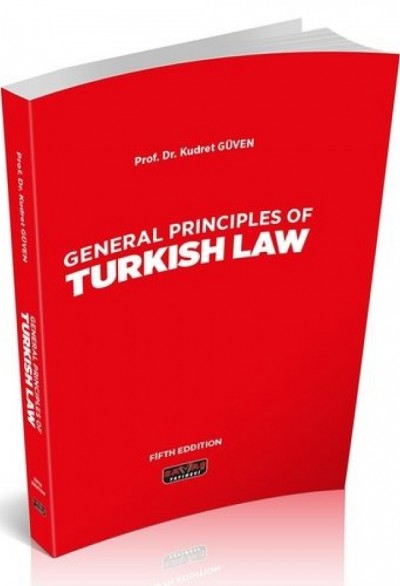 General Principles Of
Turkish Law
Kudret Güven
5. Baskı
Şubat 2020
Contents
Chapter I
The Contex And The Source Of Law
Chapter II
Civil Law
Law Of Oblıgatıons
Commercıal Law (Ticaret Hukuku-German. Handelsrecht)
Lıterary Rıghts (Lıterary Law: Fikri Haklar; İmmaterial Güterrecht,Urheberrechte)
Chapter III
In General
The Elements Of The State
Constıtutıonal Law (Anayasa Hukuku; German: Verfassungsrecht)
Admınıstratıve Law (İdare Hukuku; German: Verwaltungsrecht)
Internatıonal Publıc Law (Uluslararası Kamu Hukuku; German. Völkerrecht, Internationales Öffentliches Recht)
Criminal Law (Ceza Hukuku-German: Strafrecht)
Chapter IV
In General
Internatıonal Prıvate Law (Devletler Özel Hukuku; German: Internationales Privatrecht)
Land Law (Agrarıan Law) Toprak Hukuku: German: Bodenrecht)
Labor Law (İş Hukuku; German: Arbeitsrecht)
Law Of Procedure (Yargılama Hukuku-Usul Hukuku; German: Prozessrecht)
Law Of Execution And Bankruptcy Law(İcra Ve İflashukuku; German; Execution-Und Konkursrecht)
Tax Law (Vergi Hukuku-German: Steuerrecht)
Envıronmental Law (Çevre Hukuku; German: Unweltschutzrecht)
Alphabetıcal Legal Terms
PREFACE FOR THE FİFTH EDDİTİON
I am very glad and proud of being face to face with my students again, by the fifth eddion of my book. Nowadays many faculties is following the trend of studying most of the cours in english, although it is not an easy way of understanding the concepts, theories and thoughts, expelained in a foreign language. Because Turkey, as being one of the members of the developed and civilised earth, needs staff who knows english in every profession and especially in Law. in order to be in contact with the other nations of the globalised wold. In Turkey we have a famous saying; “one language is one person, two languages are two peson; that indicates the importance of foreign languages in perception, innovation, invention and creating new ideas. Fort his reason, our studends and jurists must urge themselves to learn at least one foreign language, especially english which is spoken all over the world.
I am sure that this book will be sufficient and adequate enough to learn the concepts concerning law with simple words. I tried to give every english equavalents of Turkish Law concepts and every alterations of codes (eg. Turkish Civil Code, Turkish Code of Obligation, Turkish Commercial Code, Turkish Criminal Code and Code of Criminal Procedure and especially the Constitution of date 1982), made recently. So, his book as being the latest book encovering all of the changes in different branches of Turkish Law system, has an important value to be mentioned. Also in this eddition a new chapter at baout Law of Execution and Bankruptcy has been added, so that an important lack of the revious edditions has been filled out for the sake of perfectionalism.
I hope, my students and my dear colleagues will find the book useful and appreciable and recommend it to their friends. I am open to every kind of critics as usual. I will be very happy if they find the printing or spelling mistakes and call may attention to those, so that I can correct them in the next eddition.
I wish facility and success to my readers, who are eager to learn the basic knowledge of Turkish Law in english. This will be certainly a beginning but not the last word. With this conscious ness, a rational bibliographical reference has been given both at the beginning or by the attributions at the end of each chapter which each of them is about on of the branches of Private and Public Law and Law branches, having sui generis qualifications. The ones who are interested in making a broad study, may reach and examine those expressed works.

Thanks to Savaş Yayınevi, because of this carefull publication. Live in an englightened World; with success. Ankara, 2020
Yorum yapabilmek için üye girişi yapmalısınız, üye değilseniz tıklayınız...