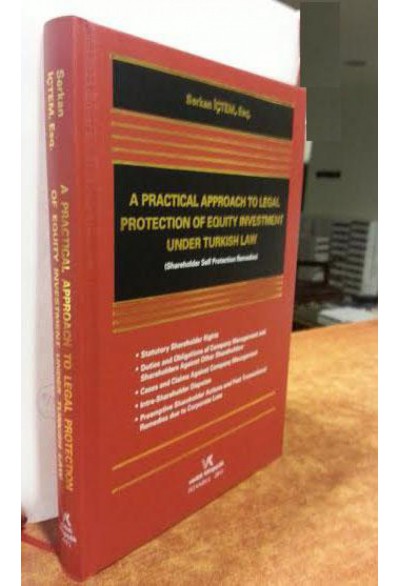 If one would have to describe this study in one sentence it would be a discussion of possible legal remedies and alternatives under Turkish law aiming to protect a shareholder against mismanagement or fellow shareholder’s abusive actions. Of course a one sentence summary of the subject matter does not do justice to the content. The idea for this study came from a number of real life issues concerning intra shareholder disputes which we were professionally involved.  In so many years and in so many cases, we have had to deal with almost all of the issues captured in this study one way or the other, sometimes more than one.  We were asked to represent clients against directors believed to be misusing corporate funds, sometimes challenge controlling shareholder actions and decisions and in other different cases defend such actions.  Sometimes the demand was merely to oppose or prevent a detrimental corporate action before implementation but sometimes it was a post action effort and a chase after the wrongdoers for compensation.
We tried to adopt a rather proactive and pragmatic approach in terms of discussing certain corporate actions and explained in general, available causes of action either to enforce those rights or to compensate corporate damage. Proactive in the form of suggesting or at least introducing a shareholder various legal actions and rights that may be used within the corporate decision making mechanism and various law suits in connection thereto.  Pragmatic in the sense that those suggestions which have been presented in a rather chronological order have mostly been used in real legal practice or even if yet untried, in our opinion has a chance of real success.  It is fair to say that the focal point of the study is around director and shareholder (against another shareholder) liability issues and the available cause of action in relation to the same. While discussing the subject inevitably the study explains, in rather detailed fashion, the statutory obligations of a director, breach of which may call for statutory liability and possible ways to carry forward a legal battle directly against a hostile shareholder.  Of course when attempting to make an analysis of legal ways to protect an equity investment, a review of statutory shareholder rights is essential which we attempted to do so to the extent those rights relate directly to our topic.  We do not purport to explain all shareholder rights under Turkish corporate law thus the list is a selected one.  All in all, the study includes various important statutory shareholder rights and legal actions that relate directly to those rights.
The methodology followed is by adoption of an equity investors’ perspective and to suggest practical legal means to regain effective control of a local Turkish investment company, if of course holding a majority equity position, and seek financial retribution while possibly seeking an exit.  Reader shall keep in mind that this is not an academic study. Each chapter or each legal action is worthy of an independent study in much greater detail which exceeds our limited goal captured herein. The intention is to rather suggest a road map, provide insight on available shareholder rights and remedies and suggest a course of action by giving an overall understanding to the equity investor on “what can be done under Turkish law” to save the day.  With that in mind our perspective throughout the study has been that of a shareholder (the equity investor) and his possible course of action mostly against directors and in some cases against fellow shareholders. A few words on contributors! I am deeply grateful to Vedat Carbaş, my publishing house for his continuous efforts to persuade me to prepare this study. It has finally paid off. Also I would like to extend my thanks to Berrin Doğrul for her editing work.

As mentioned, TCC affords numerous statutory rights to a shareholder, including to those minority shareholders.  In this respect it is pivotal to focus first on the right of a shareholder to receive information (directly or through directors) on company’s business affairs.  After all adequate information is key to determine what needs to be done as next steps.  For any further legal action that may be taken against other shareholders or directors, shareholder first needs to be fully aware of the necessary factual background surrounding the company’s past and ongoing business and possess documentary evidence in this respect.  Therefore, we believe that information and document compilation constitutes a priority task.  Jumping onto legal action phase without possessing the necessary factual and documentary background will yield nothing but result in a waste of effort and more money on part of the already unhappy investor.     • Kanuni Hissedar Hakları
• Şirket Yöneticilerinin ve Hissedarların Diğer Hissedarlara Karşı Hak ve Yükümlülükleri
• Şirket Yönetimine Karşı Talep ve Davalar
• Hissedarlar Arası Hukuki İhtilaflar
• Önleyici Hissedar Hakları ve Şirket Zararından Dolayı İşlem Sonrası Çareler